Last Sunday, I rode up the Poudre Canyon for the third week in a row to check on Joe Wright reservoir, looking to hit the grayling spawning run. Three years ago I lucked into it on June 26, and it was some of the craziest fly fishing action I’ve ever experienced… a fish on every cast until your arm got tired (which took a long time, because the grayling were all exactly the same size, not very big). 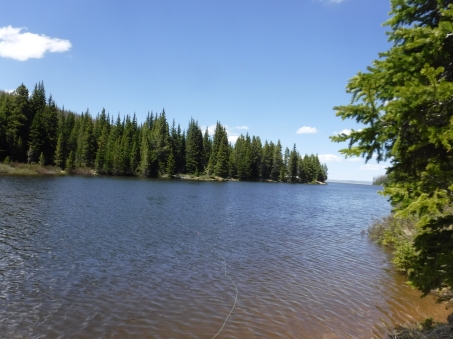 Topped out on week 3

Still some snow on week 2

Still a bit of snow to feed the runoff

On the first weekend this year, the lake was almost entirely iced over, and I caught a few little grayling.

The next weekend, the ice was entirely gone, but for a strip remaining at the dam, and I caught a couple bigger grayling.

Last weekend, the water level was almost topped out and the creek inlet, where the fish stack up to head to their spawning runs upstream, looked perfect. But the fish weren’t there. I caught one full sized fish. 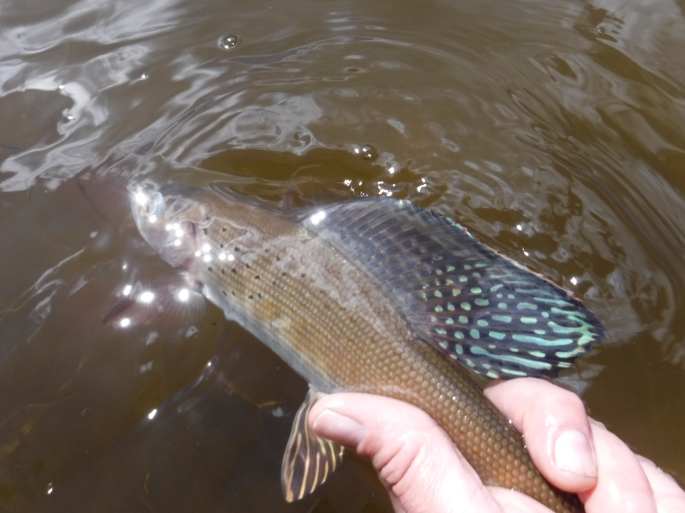 Tomorrow I’ll go again and see what the fish think of the Summer Solstice.

The other goal for the weekly run up the canyon is to look for signs of the giant salmonfly hatch. Pteronarcys californica are the biggest bugs in any river, and when the nymphs begin crawling towards the bank to hatch into their flying form, the fish lose all inhibition. I lucked into the salmonfly hatch two years ago on the Madison in Montana, and it was a highlight of that entire summer.

Underwater image of a salmonfly nymph

The Poudre salmonfly hatch is supposed to be happening any minute, but I have yet to find any empty husks on the river stones, and I’ve seen no adult bugs in the willows by the bank. The river is finally calming down from runoff high water, and I caught my first Poudre trout of 2020 last Sunday evening. A couple of them did eat a big salmonfly pattern, the improved sofa pillow. I have a feeling that tomorrow is going to be great.

2021 had plenty of good moments to look back on, despite the neverending pandemic. Here’s wishing you and yours a prosperous and joyful 2022. Happy New Year! #travelingwithtools
Sharing some quality time with Ms. Squeakers. #catsofinstagram
Vittorio Jano's magnesium masterpiece, the Alfa Romeo 8C 2300. Some pictures of the innards and a word about rear main seals... on the blog at travelingwithtools.com (link in bio...) #alfaromeo
A graphic display of the difference between the standard Bugatti Type 57 chassis and the 57S. The S, for "surbaissé", or French for "low", had a frame that passed the rear axle through windows in the C-channel. This particular car had issues with the DeRam shocks at the rear, which led to the axle banging into the window over every bump, causing quite an uncharacteristic racket.
Boondocking adjacent to Valley of Fire State Park... a pretty good location to spend a few days. A review with more pics over at the travelingwithtools.com blog... (link in bio) #boondocking
Pahranagat lake at sunset.
Back to flyfishing...
20 years ago the SKUSA SuperNationals were held at the Las Vegas Karting Center for the last time. Here's some shots from the SuperPro Main Event that weekend in 2001.
21 years ago now... Damn!
The last two days of our time at Serengeti National Park in Tanzania were pretty special, but all good things must come to an end... More photos and words over at the travelingwithtools.com blog. (link in bio...)
I’ve been setup here at Government Wash on Lake Mead for almost two weeks now, and I finally took my fly rod down to cast at the pods of bait I could see from the RV up on the hill. The schools of shad were so thick that I snagged one on every third cast or so, but none of the bass that were chasing them were interested in any of my flies. Even when they had an injured shad attached!
5 years ago today, we were back home after three amazing weeks in Africa. The last three days of the adventure were in Serengeti National Park, Tanzania. How I wish we could go back tomorrow.